After Told He May Not Survive, Rehabilitation Helps COVID-19 Long-Hauler Walk and Talk Again

“When I got to Saint Luke’s, they told me I had a fighting chance.” -Marty Beasley

Marty Beasley remembers when doctors told him he may not survive.

The 48-year-old Liberty resident was severely ill with COVID-19 in another hospital when the care team told him he should prepare to go to hospice.

He was in the hospital for weeks, on a ventilator for part of the time, but was making no progress. His health declined substantially, and he was transferred to Saint Luke’s Hospital of Kansas City.

“When I got to Saint Luke’s, they told me I had a fighting chance,” Marty said.

He remained in the hospital in critical condition for several weeks. The virus attacked all his organ systems, requiring a team of specialists on his care. The team of doctors worked to treat severe complications in his lungs, heart, nervous system, kidneys, and more.

Three months after he first went to the hospital, Marty was transferred to Saint Luke’s Rehabilitation Institute.

After suffering multiple complications and being in a hospital bed for so long, he needed to relearn how to do everything. He could not move his arms or legs, talk, sit, swallow, or perform basic day-to-day activities like bathing and dressing himself.

“Marty had a pretty rare, severe case,” said Dr. Lisa Hermes at Saint Luke’s Rehabilitation Institute. “When he first came to us, Marty couldn’t sit up in bed without getting very lightheaded and symptomatic. The virus had attacked all his systems, making it a more extreme case than most.”

He worked with physical, occupational, speech, and memory therapists, as well as nursing for several hours each day.

“Because I was intubated, I had to relearn how to talk—I couldn’t speak or verbally communicate at all because of the tracheostomy and tubes in my throat,” Marty said. “I also couldn’t hardly move, so they had to use lift devices to help me.”

His physical therapist, Sara Gerker, started with the basics. At the beginning, they did all exercises while Marty was in bed or seated. By his afternoon therapy sessions, he would have no energy left.

Over time, they progressed to working on standing up with assistance, transfers, cycling on a stationary bike to improve coordination and endurance, and more strengthening exercises.

“Marty was very determined,” Gerker said. “Even when he would start to get tired, he would push himself really hard. Toward the end, I would have to tell him, ‘hey, your heart rate is getting high, we need to take a rest.’”

Gerker also commented on Marty’s good sense of humor and a quick wit, which helped to keep his spirits high.

“Everyone at the Rehabilitation Institute treated me like family,” Marty said. “People there really care, and I saw the difference. Instead of being a birthday and a full name, they referred to me by my nickname and would wave and ask me how I was doing each time I went down the hall. The bedside manner was the only thing that kept me going.”

He recounted each milestone from swallowing foods and liquids again, to being able to reach down and put on his own socks.

After weeks of rehab, Marty took his first steps.

“It was very scary—I hadn’t walked in so long,” Marty said. “I remember thinking, ‘Can I do it?’”

Before long, Marty was standing without support and walking up to 150 feet. He could also go up and down stairs with some support.

After 18 weeks in the hospitals and Saint Luke’s Rehabilitation Institute, Marty was able to move to a long-term care facility in the Northland. There, he could be closer to his family and have full-time support.

He looks forward to finally seeing his family once again and continuing his progress.

“We get excited for every patient when they get to go home or move on to the next step,” Dr. Hermes said. “It’s always exciting to celebrate every success and milestone.”

Marty’s work isn’t over. But Gerker said she knows he’s ready to take on the challenge.

“After rehab, many of these patients are still going to have to work hard to get back to what they were doing before—it’s definitely a long road,” Gerker said.

“But Marty is very determined. He was determined to walk out… and he did!” 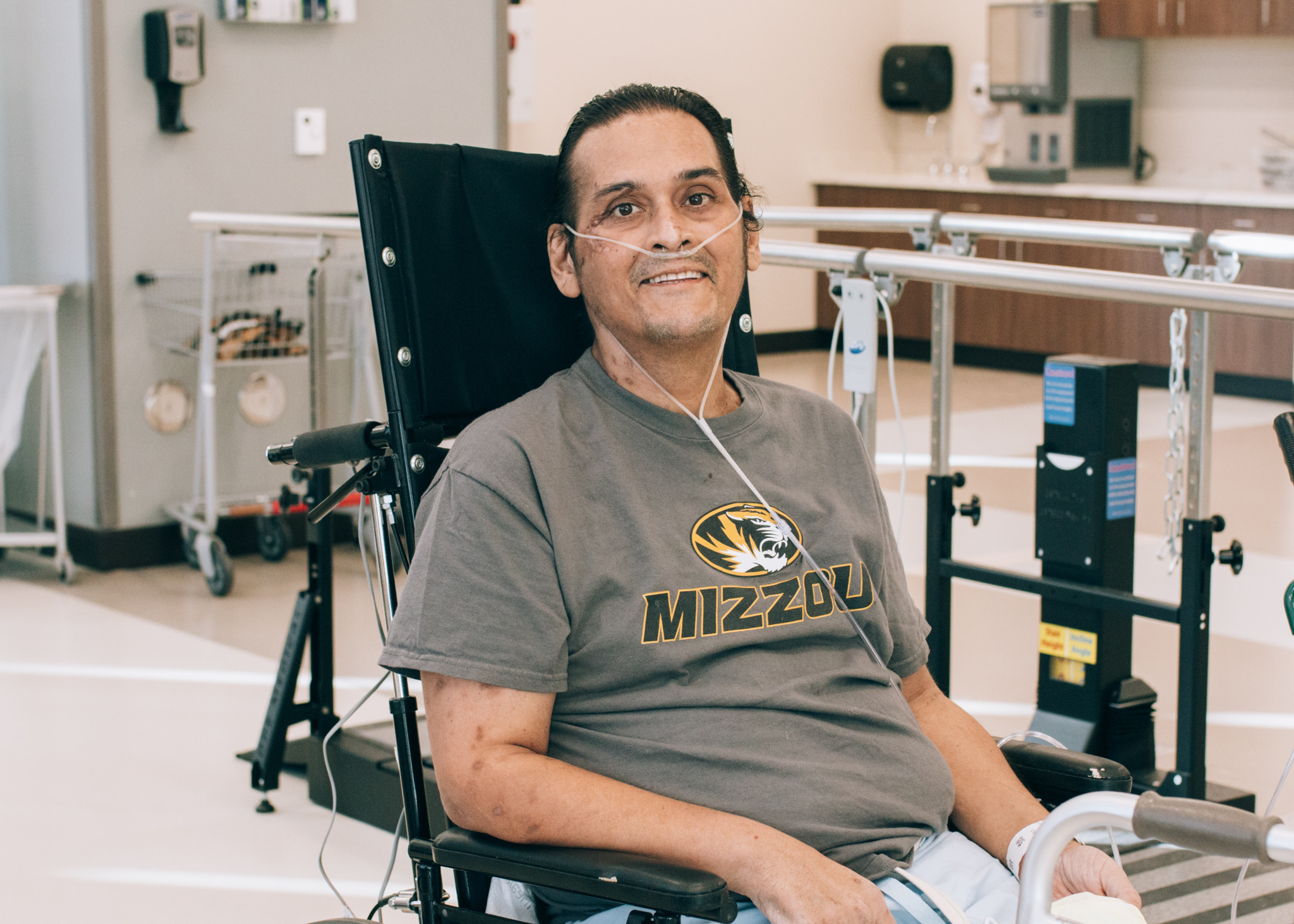 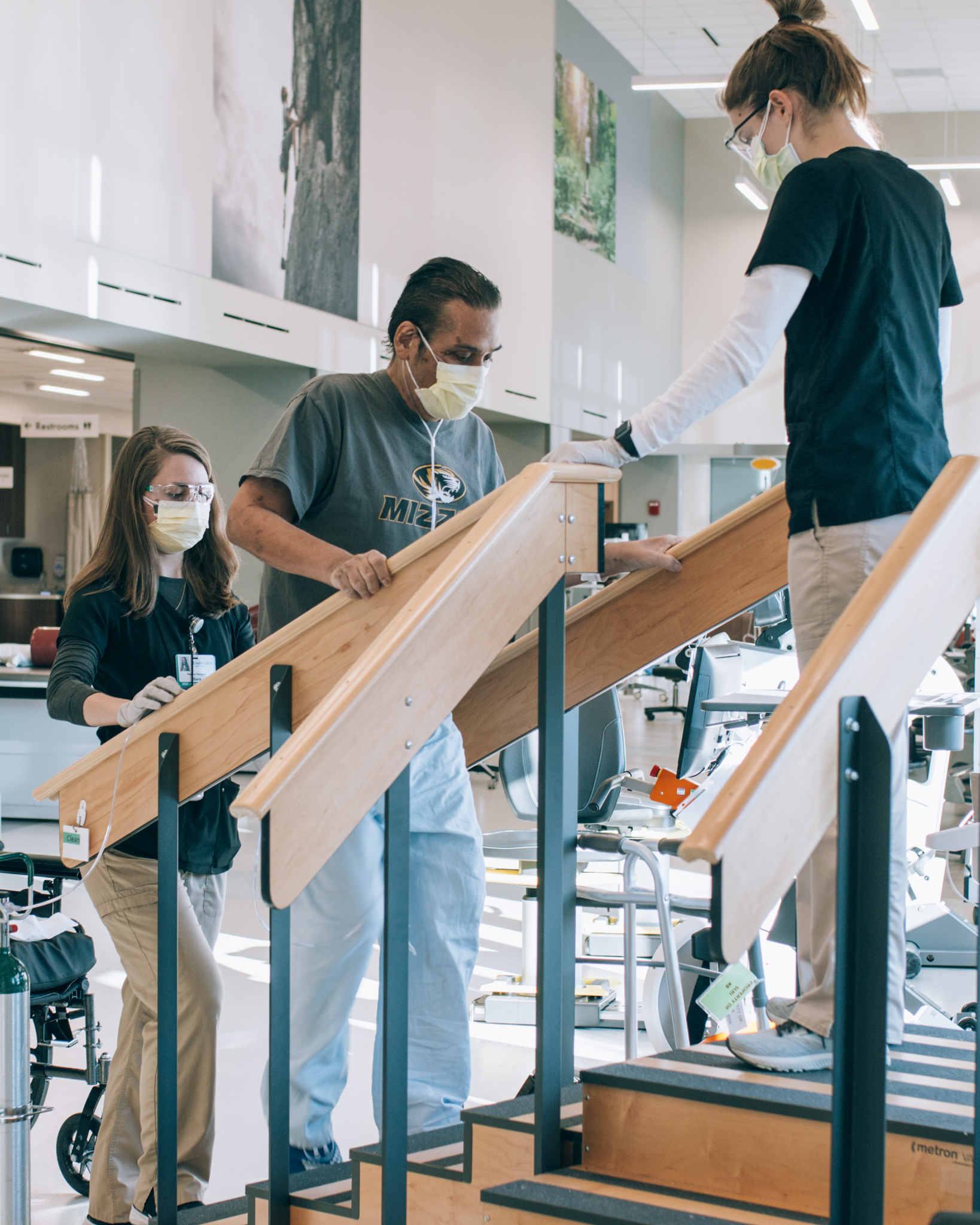 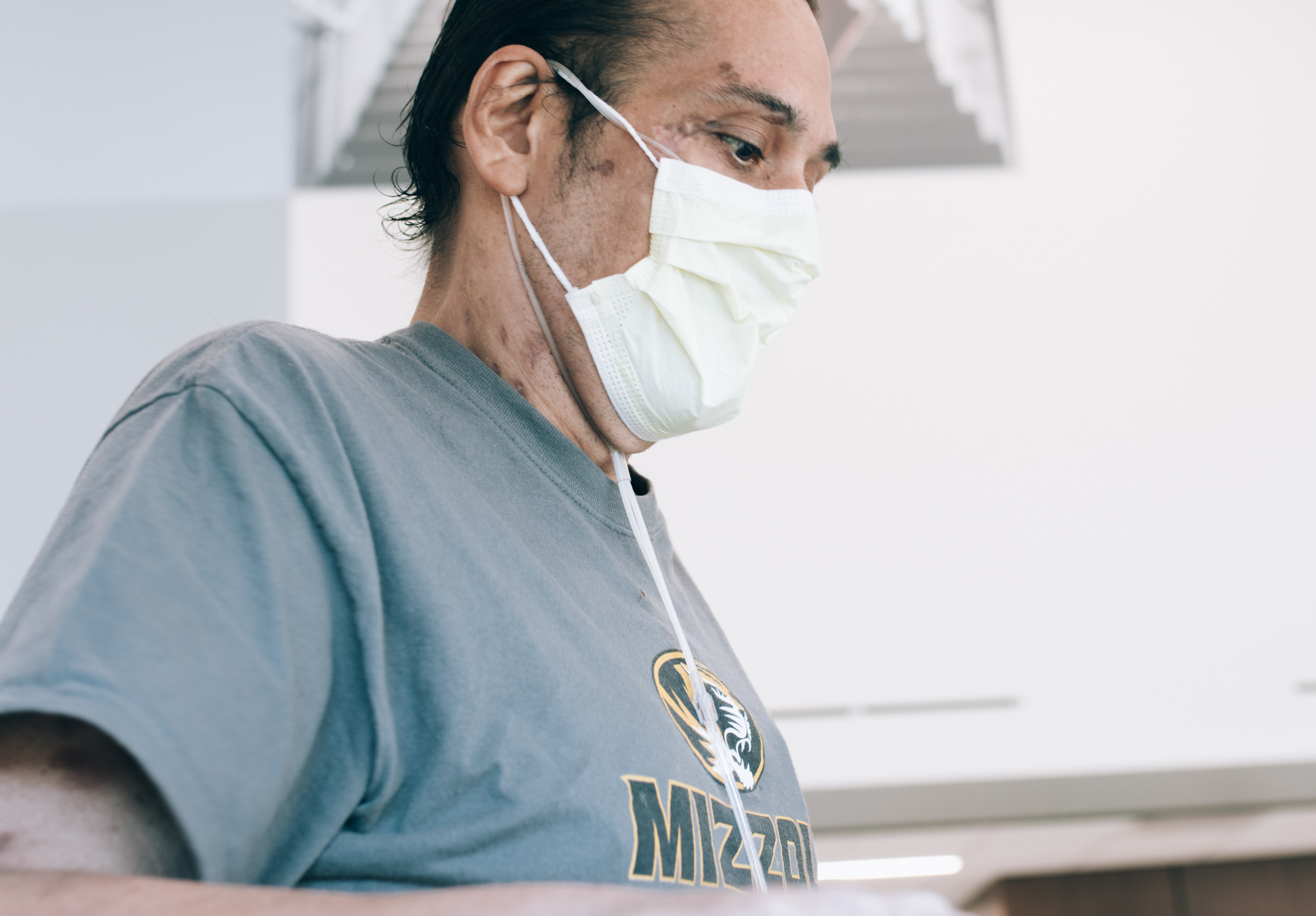 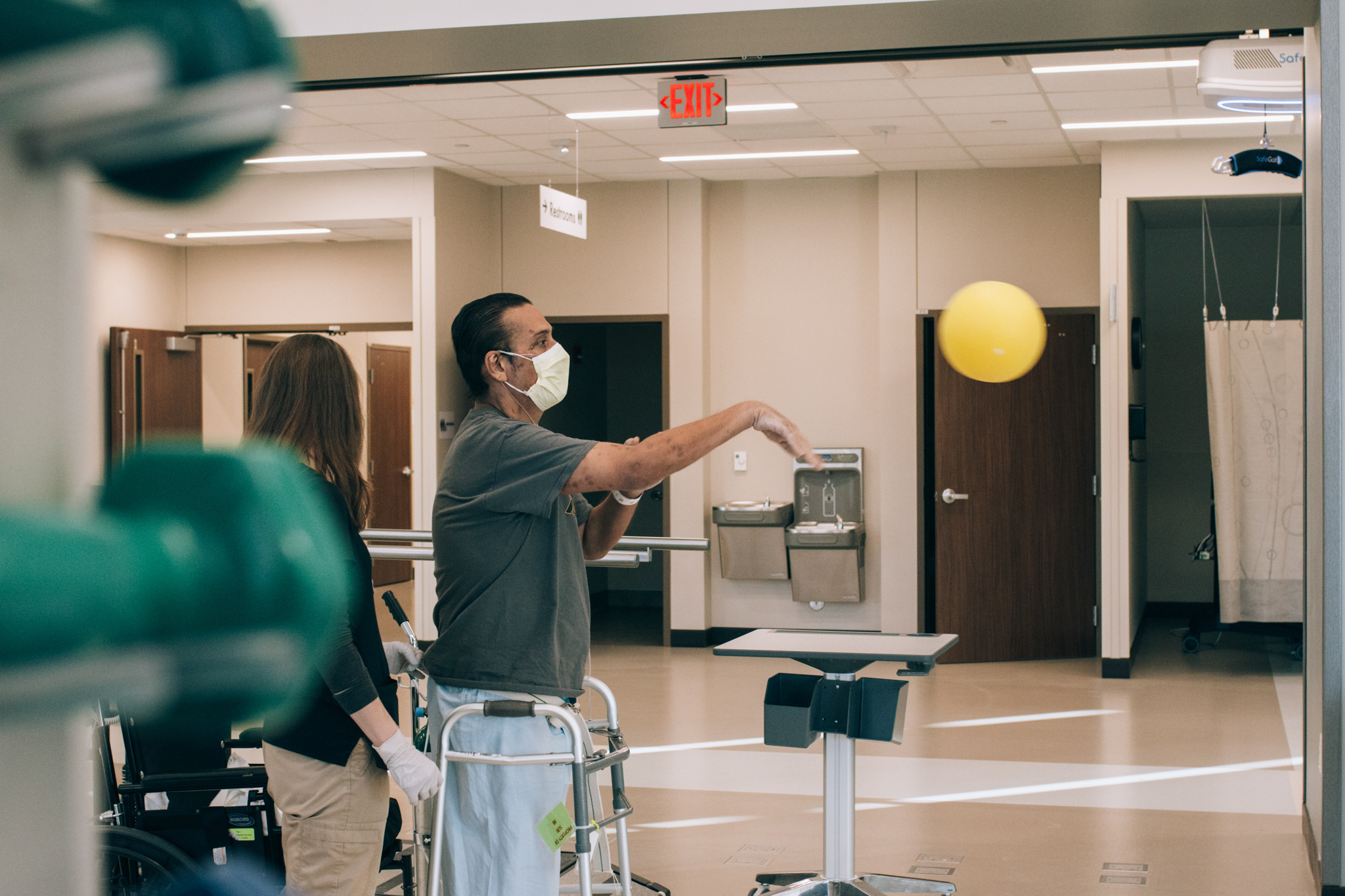 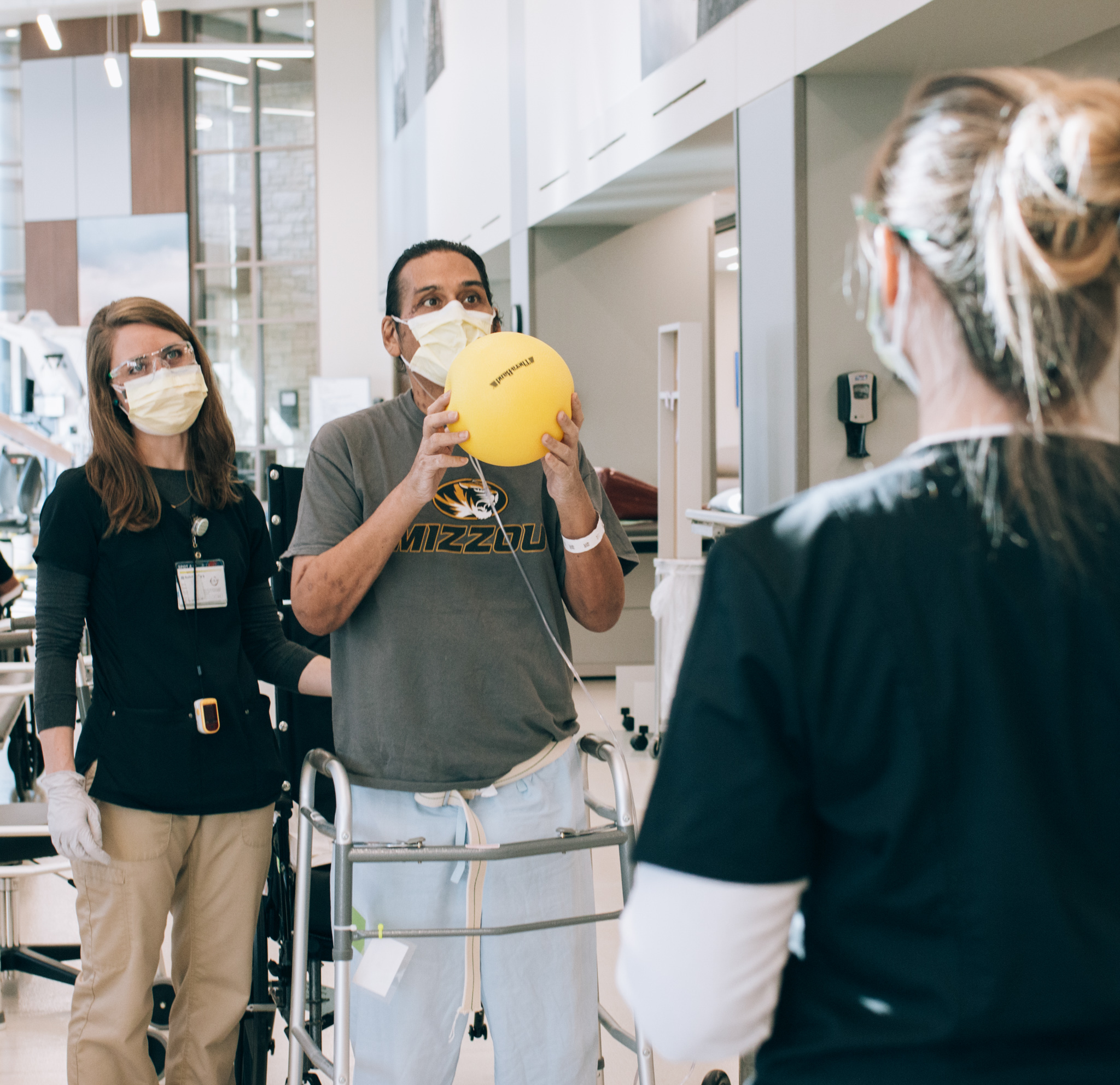 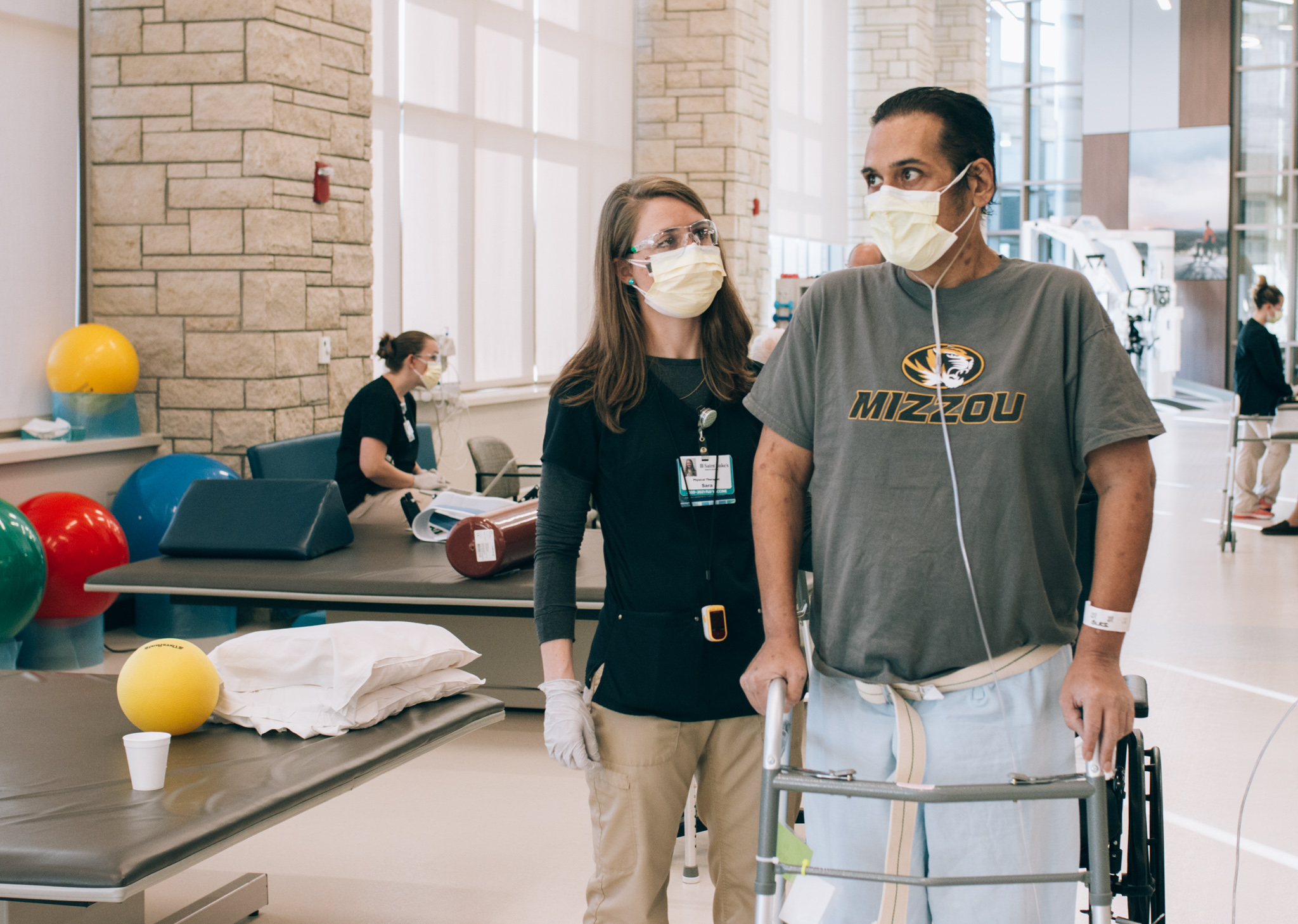