After Stroke, Rehab Helps Susan Walk on Her Own Once Again

“The amount of care Saint Luke’s had to offer was huge. We knew right away it was where I needed to be.” -Susan Rushing

Susan Rushing has lived in her home in Gardner with her husband, Ron, for more than 20 years. She knows the house like the back of her hand since they built it from the ground up.

But one day, she kept stumbling into the living room furniture she walks by every day.

She sat for a while, waiting to regain her balance and stood up again.

“I went to the kitchen and hit the furniture again,” Susan said. “Then I felt like I needed to hang on to the kitchen chair because I felt off-balance. Then I thought maybe I should go to the emergency room.”

Ron took Susan to another hospital where the medical team performed a series of tests and scans. Susan had two aneurysms, one on each side of her brain. One was too large and oddly shaped, so she had to have it fixed.

After weeks of waiting at home while being careful not to overexert herself, Susan underwent surgery to clip the aneurysm two months later. But as the team was finishing up the procedure, Susan suffered a stroke due to a spasm in one of her arteries.

She woke up unable to move her entire left side.

“I wasn’t sure if I was going to be able to walk again,” Susan said. “When they walked me down the hallway for the first time, they had to move my left foot each time I took a step. It was very emotional—I would look at my arm and tell it to move, and I couldn’t get it to do anything.”

Ron, their son Bryan, and a family friend went to numerous facilities around the Kansas City area to find the best place for Susan to receive top rehabilitation care. When they arrived at Saint Luke’s South Hospital, they talked to Dr. Brad Steinle, the medical director of Saint Luke’s rehabilitation services, and a physical therapist about the comprehensive program.

“The amount of care Saint Luke’s had to offer was huge, and everyone was so genuine,” Susan said. “We knew right away it was where I needed to be.”

Susan went straight to inpatient rehab at Saint Luke’s South Hospital where she worked hard with physical and occupational therapists six days a week to improve her strength and mobility.

As part of her rehab, she has used several cutting-edge robotic machines—many of which are not available anywhere else in the region—including the Diego, the Amadeo, InMotion ARM, and MYRO to help with her fine motor skills and arm function.

“The way the brain recovers after a stroke or brain hemorrhage is what we refer to as neuroplasticity or remodeling of the cerebral cortex,” Dr. Steinle said. “The way that happens is by delivering intense therapy with many repetitions of repeated normal movement—the robotic devices help us deliver that.”

With traditional walking therapy after a stroke or hemorrhage, patients might get in 50-100 steps. But with the help of the robotics, therapists can deliver 500 to 1,000 steps according to Dr. Steinle. The same goes with the robotics Susan used for her left arm and hand.

After two-and-a-half-weeks, Susan was able to go home. She went from not being able to move her left leg after her stroke – to walking with a walker – then walking with a cane – and now is walking completely on her own.

“I was really put to the test right from the start in inpatient rehab,” Susan said. “I had a physical therapist that really pushed me to the limit. I wasn’t afraid to try anything he told me to do, and I really benefitted from that.”

Now several months later, Susan continues with outpatient rehab three times a week. She does many challenging exercises with occupational and physical therapists to strengthen her left arm and improve her balance.

“Aside from the highly-trained staff and robotics, something else that makes Saint Luke’s unique is the continuity of care,” Dr. Steinle said. “Mrs. Rushing will continue to follow up with me as long as she needs me. That doesn’t typically happen in a lot of acute inpatient rehabilitation programs.”

Although she’s improved by leaps and bounds since her stroke, Susan looks forward to the accomplishments still ahead.

“I look forward to be able to hold a fishing pole, bait my own hook, and sing in my church choir without needing a music stand,” Susan said. “I’m looking forward to doing more things that bring joy to my life.”

“I can’t say enough about my experience with Saint Luke’s. Everyone I have encountered has been wonderful - Dr. Steinle, the inpatient and outpatient therapists, even the people that cleaned my room. Saint Luke’s is a great place to go.” 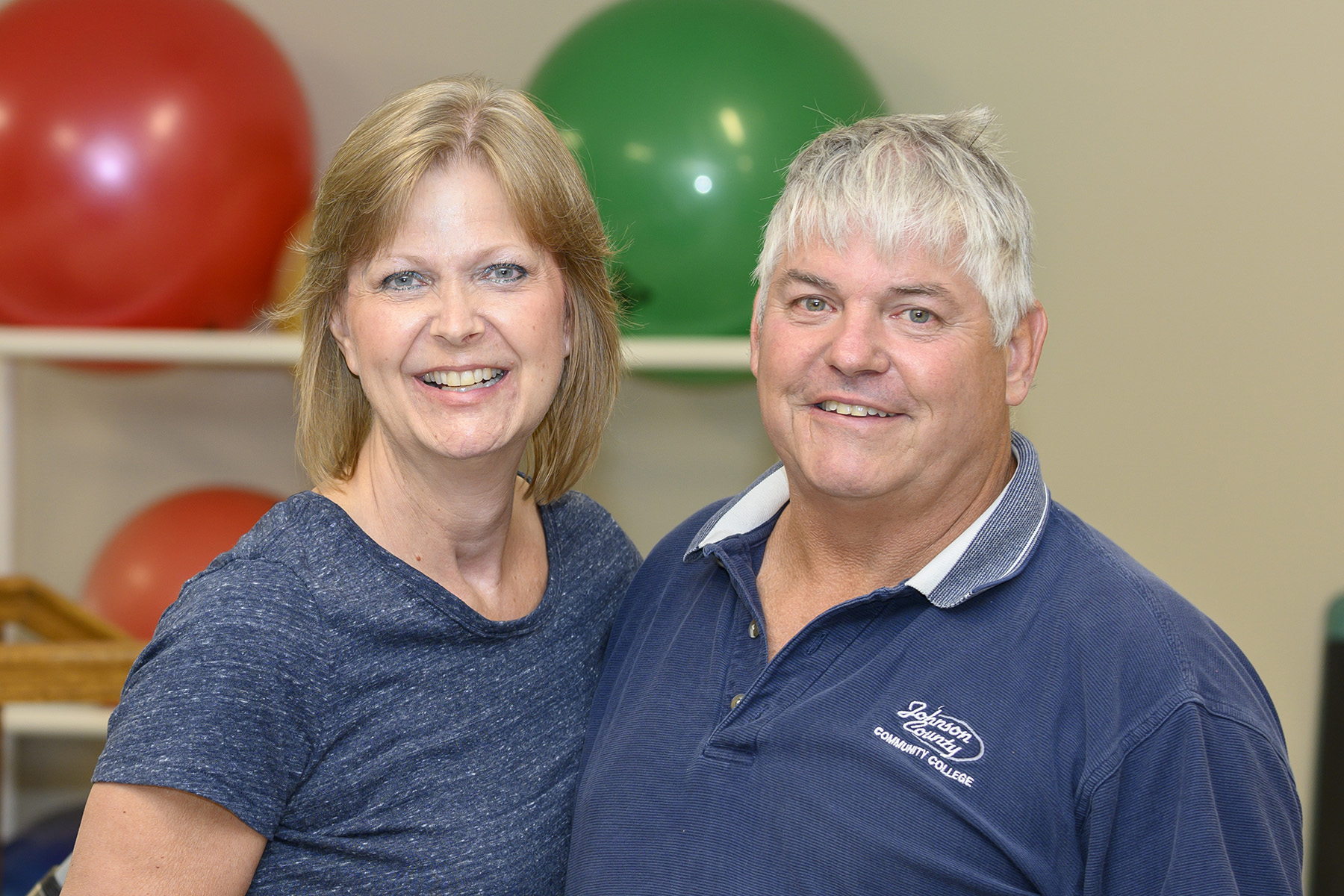 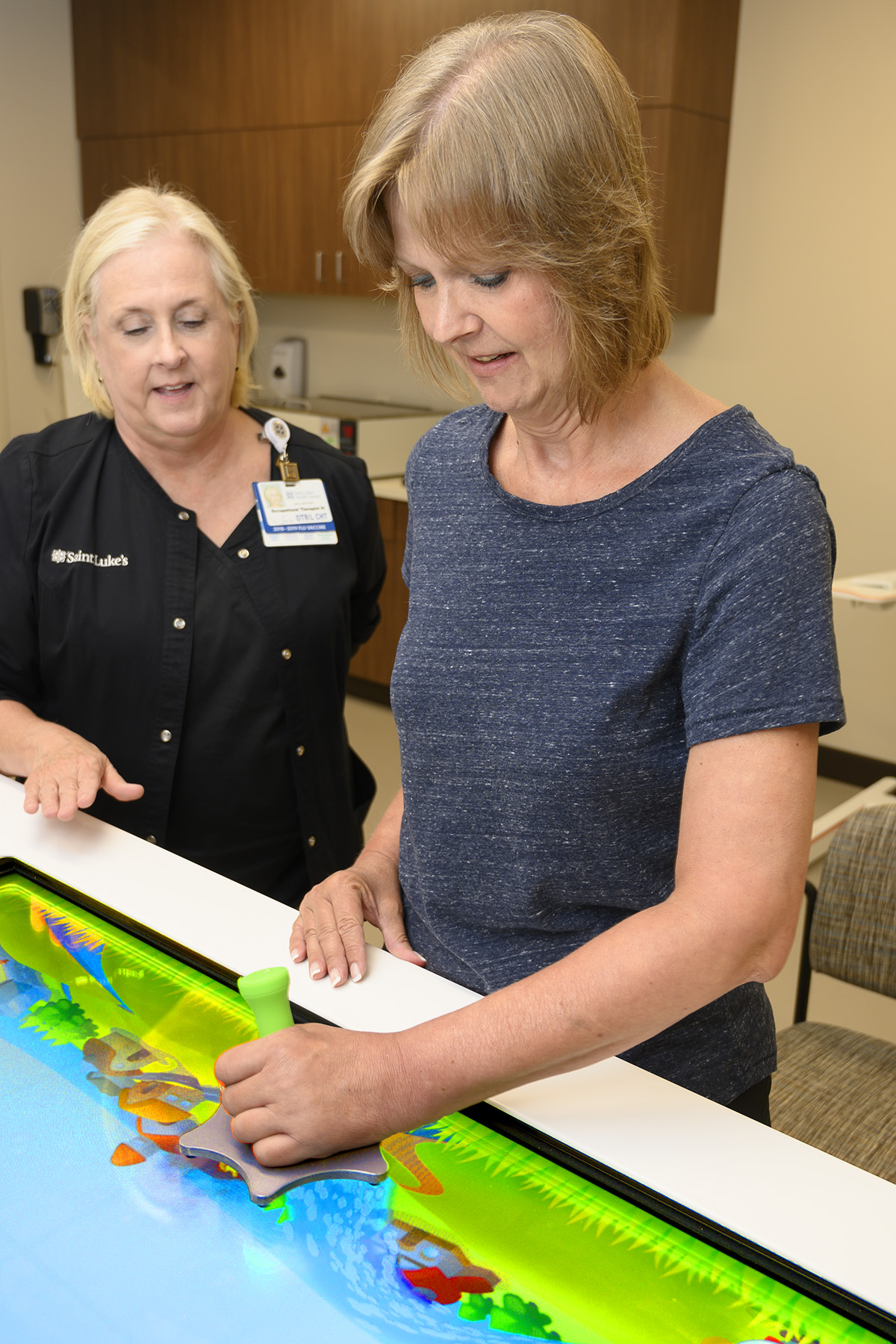 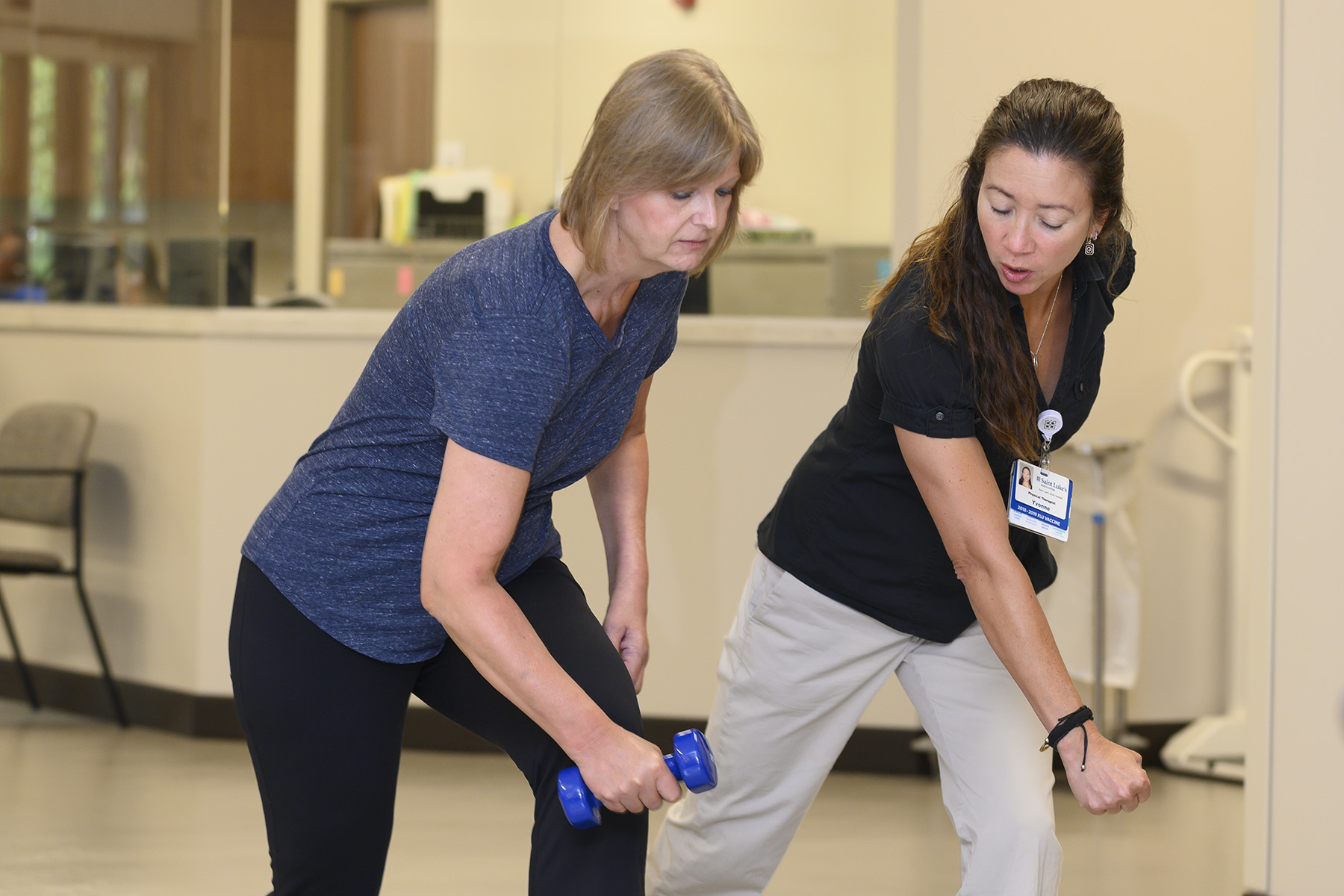 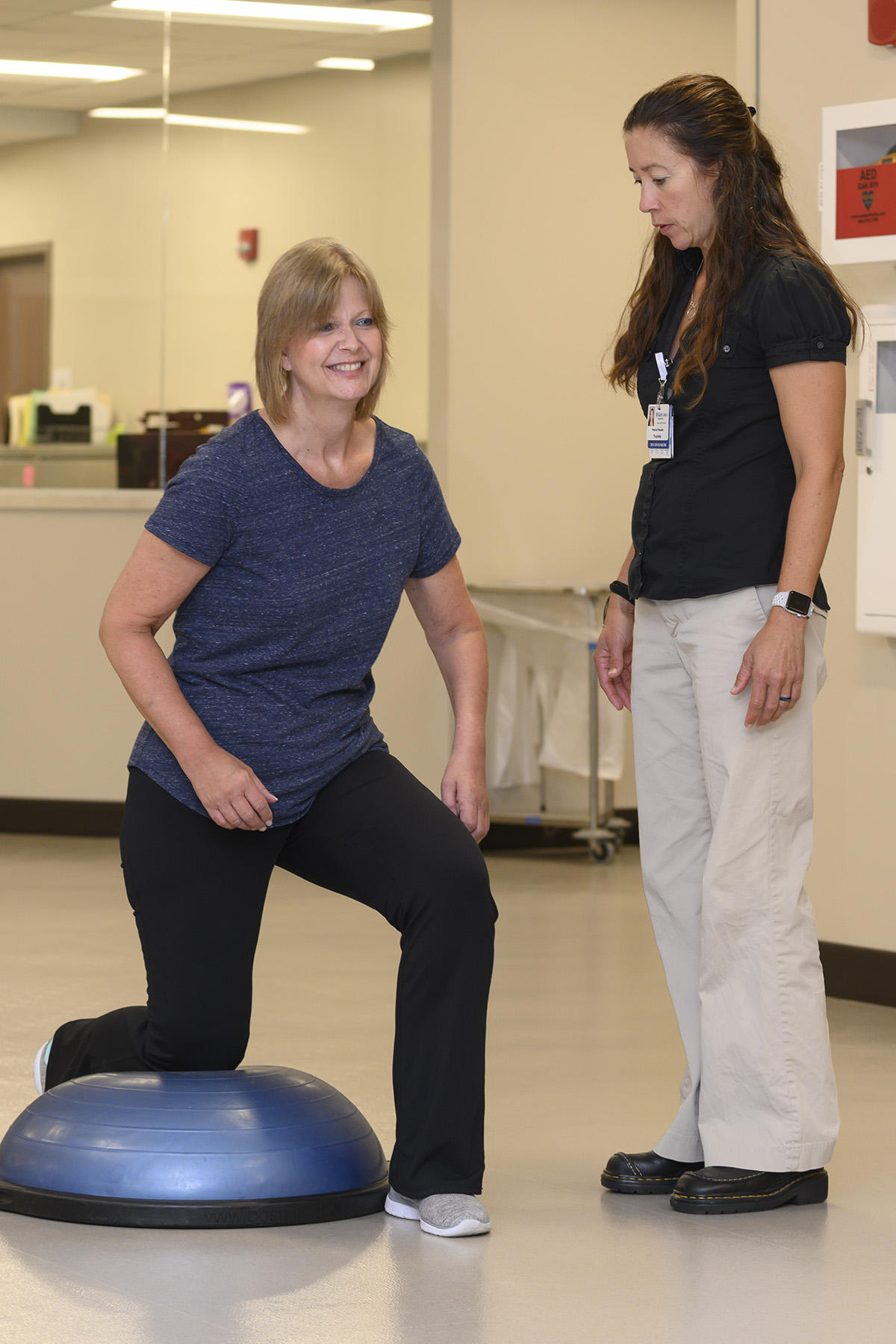 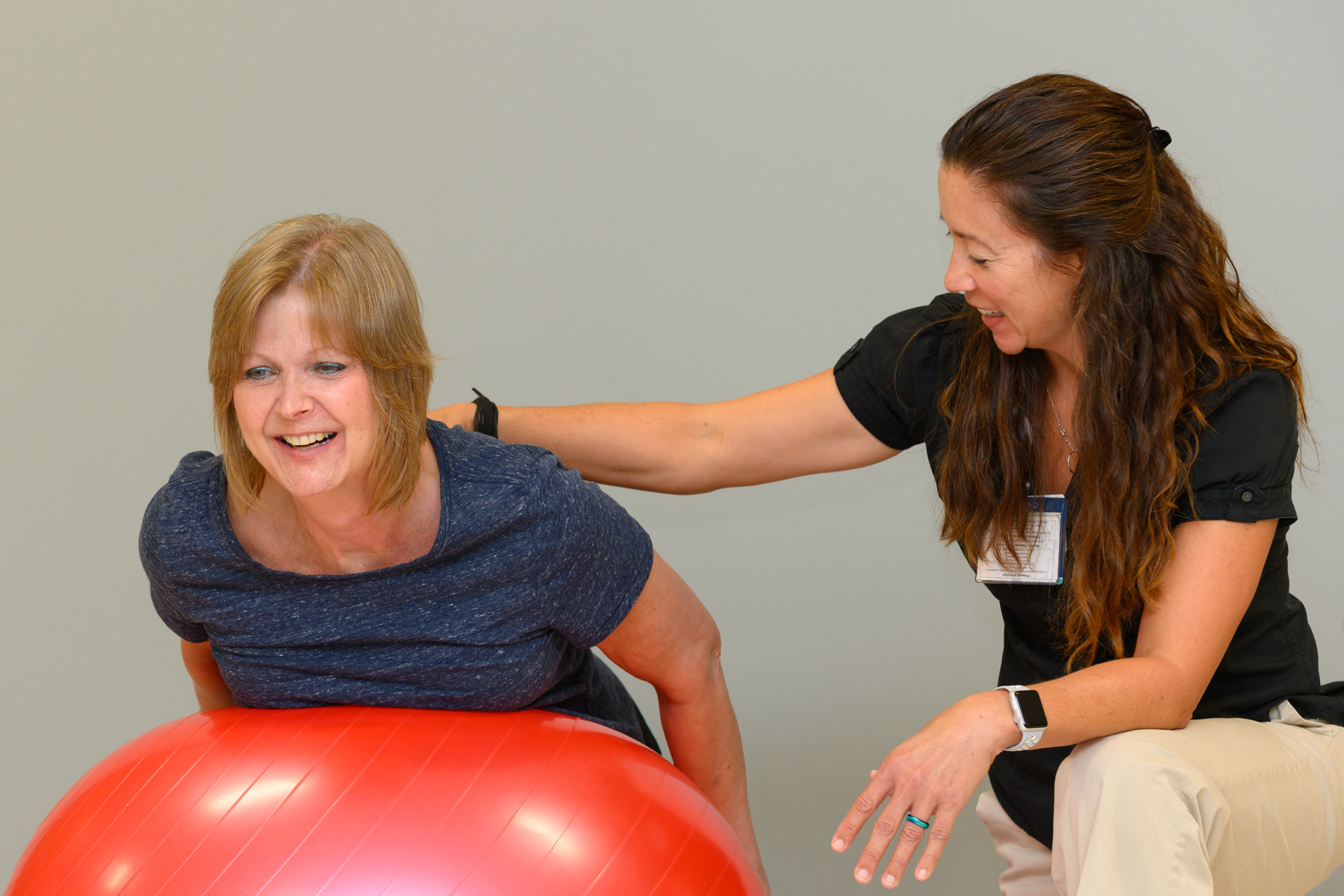