“This treatment allowed me to relax and enjoy living again.” - Linda Braxdale

For three years, Linda Braxdale endured throbbing pain in her lower back and down her left leg. It woke her at night. She couldn’t stand long enough to wash dishes, do laundry, or push a vacuum in her Wellington, Mo., home. The pain and frustration often left her feeling helpless and defeated—and reduced to tears.

Linda was among the one in three Americans who suffers from chronic pain.

For months after her hip replacement she’d been confined to a wheelchair. Eventually she could get around with a cane, but the pain did not subside. Doctors offered her hydrocodone. It dulled her senses but not the pain.

“Opioids are often not effective as a long-term solution to the treatment of chronic pain,” said Dr. Gaume. He had something else in mind for Linda.

Dr. Gaume interviewed Linda. He moved her limbs. He looked at images from CT scans. Linda was impressed with his thoroughness.

“Dr. Gaume has a bedside manner I have not seen in a doctor in a long time,” she said. “He made me feel like I was his only patient.”

His conclusion: Her symptoms were from hip, not back, pain. A new treatment called COOLIEF RF had just become available in Kansas City, and Dr. Gaume thought Linda would be an excellent candidate. It involved deadening the nerves in her hip with cooled radiofrequency ablation (CRF). (See “Chill Out” on page 4 to learn more about the procedure)

“Are you willing to be my first patient?” Dr. Gaume asked her.

“I’d do anything to get rid of this pain,” she said.

But first, she would have to pass a test.

Dr. Gaume injected lidocaine, a numbing agent, into the two sensory nerves in Linda’s hip that were causing the pain. If the shot deadened her pain, CRF would likely work too. Within seconds after the injection, Linda began to cry. Dr. Gaume asked her if she was okay.

They were happy tears, Linda said. For the first time in three years, the pain was gone.

As Dr. Gaume positioned Linda on the table, he explained that she would be awake during the treatment. He would need her to respond to electrical stimulation to make sure he didn’t deaden nerves that controlled movement. He also warned her it could be weeks before she saw relief after the CRF treatment, unlike the immediate relief she felt with lidocaine.

CRF uses water to cool the surrounding tissue. This allowed Dr. Gaume to create a larger lesion, which increased the chances of quieting the right nerves. Bony landmarks and scan images helped him position the needle. Linda felt some stinging, but said the pain was nothing compared to what she’d felt before.

Two weeks later, she was pushing the vacuum cleaner. Soon, she could sit long enough to attend her grandchildren’s sporting events and watch birds from the deck of her lake home.

“This treatment allowed me to relax and enjoy living again,” she said.

No pain, no pain

Linda estimates 90 percent of her pain has gone, enough to get by with occasional over-the-counter pain medicine.

“Watching my patients get their lives back is what makes practicing medicine meaningful to me,” Dr. Gaume said. He has since performed more than 100 treatments, but Linda holds a special place in his heart.

“She is an amazing lady,” he said. “She has been through so much heartache, yet she always has a smile.”

In the past five years, Linda’s has faced health challenges and the loss of her 39-year-old daughter. She relied on her faith to sustain her. In spring, she survived a serious car accident. An emergency technician said had she been more agitated she might have bled to death. Linda told him she has a guardian angel in heaven looking out for her.

As she recalled this story, she added, “I have people watching over me here on earth, too.” Dr. Gaume is one of them. 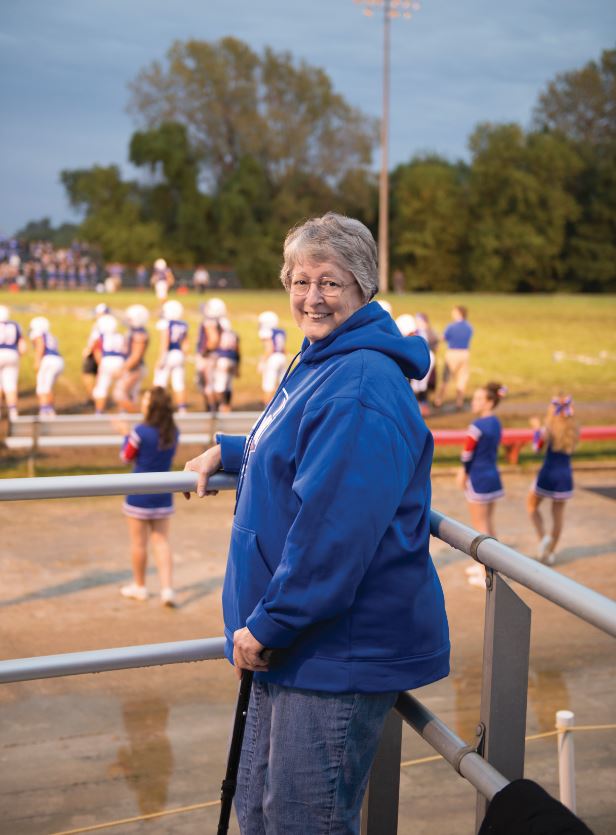