Liver Transplant: Sallie Wickens is Back in the Saddle Thanks to Saint Luke’s

“I pray daily for the family of my donor and to Saint Luke’s where I got my life back.” - Sallie Wickens

As Sallie Wickens boarded the LifeFlight helicopter in Climax Springs, Missouri, in June 2012, she had no idea it would be the last leg of a journey that started when she was 5 years old.

A car accident in 1959 had ruptured her spleen, causing internal bleeding. She got an emergency blood transfusion. A scar was the only consequence for more than 30 years. Then, an abnormal liver function test in 1989 prompted her doctor to test her for what was then a newly identified disease: Hepatitis C. (Labs didn’t start screening for it until 1989.) The virus, which often leads to cirrhosis and liver failure, spreads by coming into contact with the blood of an infected person.

Sallie tested positive for Hepatitis C. As she had never used intravenous drugs, the likely cause was the blood transfusion.

The virus can remain dormant for years and can only be detected through a blood test. Sallie noticed symptoms in the early 2000s. By 2007, she had developed cirrhosis of the liver. The scarred tissue kept her liver from filtering out toxins. She underwent treatment but couldn’t stand the side effects.

“My doctor said there was nothing else he could do for me,” Sallie said.

By 2013, her liver was failing. Her eyes had yellowed. She had trouble urinating and her abdomen was bloated with fluid. Hepatic encephalopathy, which can affect people with cirrhosis, caused her to have hallucinations.

Sallie imagined someone locked her in a closet and saw things that didn’t exist. These caused her to mistrust her own thoughts.

Her primary care doctor told her she needed more advanced treatment and suggested four Midwest locations. Sallie had worked for the National Kidney Foundation and visited dialysis centers at all of them. She remembered Saint Luke’s Hospital of Kansas City as “the most soothing and relaxing atmosphere with the nicest people.”

She had been driving to Saint Luke’s for treatment, but her latest tests showed her liver function was so low she could die at any minute. So as the helicopter landed at Saint Luke’s Hospital in June 2012, Sallie felt confident if a solution existed, the liver specialists here would find it.

“The people at Saint Luke’s took me under their collective wing,” said Sallie. “I felt like I had a family who was looking out for me.”

A transplant was now her only option. Hepatologist Laura Alba, MD, determined she met the requirements. She didn’t have cancer, high blood pressure, or heart disease. She didn’t drink alcohol or use illegal drugs.

Sallie joined 16,000 other Americans on the national waiting list for a donor liver. Nurses and doctors with special hepatology training worked to keep her alive while she waited. Fortunately, wait times at Saint Luke’s Liver Transplant Program are among the shortest in the nation. A donor liver for Sallie became available after only three and half months.

After a 12-hour surgery, Sallie had a new liver. There was a bulletin board in her hospital room with the question, “What is your goal?”

Sallie’s was to “get back into my cowboy boots.”

She would have to wait. The transplant didn’t cure the Hepatitis C, which replicates in the blood stream, but it bought her time.

In 2014, Dr. Alba put Sallie on a three-month course of a new drug, sofosbuvir, along with an old antiviral, ribavirin.

Sallie only had to take two pills a day. She was able to go home and keep up with her life, while knowing that Saint Luke’s was on hand if she ran into problems.

“This treatment was a cake walk compared to the older one,” she said. “Plus, I knew if a problem arose, I could call one number, and Saint Luke’s would figure it out for me.”

Her only side effect was lethargy during the last two weeks—plus the anxiety of waiting to find out whether the treatment worked.

On Jan. 24, 2015, Dr. Alba called to report, “You are free of the virus.” That call liberated Sallie from liver disease. It also put her back in her cowboy boots living the country life she loves.

“I am one of the luckiest people in the world to get a second chance,” Sallie said. “I pray daily for the family of my donor and to Saint Luke’s where I got my life back.” 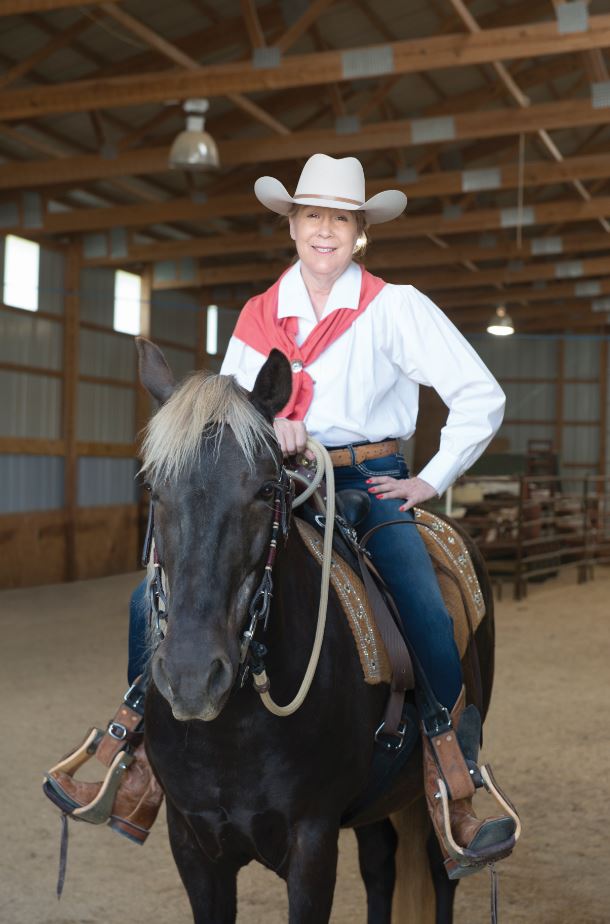