“God has put together the best team at Saint Luke’s, bringing doctors from around the world to work on my case.” - Seabrun "Candy" Hunter

The hallway to Seabrun “Candy” Hunter’s apartment seemed to get longer every day. The 68-year-old musician had to stop midway to recover his breath and strength to finish the journey.

A series of heart attacks and strokes since 2001 had weakened his heart and caused congestive heart failure. It robbed energy from the musician who used to tour the world performing with Little Richard and stay up nights composing songs like “Rockin’ Rockin’ Boogie.”

Heart failure had not only enlarged Candy’s heart and diminished its pumping capacity, but also kept his mitral valve from closing properly. Blood leaked back into his lungs instead of going out to energize his body. This mitral regurgitation worsened the heart failure in a destructive cycle.

About half of people with congestive heart failure die within five years of diagnosis, according to the American Heart Association. The 10-year survival is less than 25 percent.

Candy was so down that he started composing a letter for his friends and family to read after his death. His doctors, however, weren’t quite ready to give up on their patient.

Saint Luke’s is one of 100 sites around the United States and Canada participating in the Cardiovascular Outcomes Assessment of the MitraClip® Percutaneous Therapy (COAPT) trial. The Federal Drug Administration has already approved use of the device for people whose mitral valves have structural problems. In COAPT, investigators want to determine if the MitraClip device improves the quality of life for patients, like Candy, with functional valve problems.

Adnan Chhatriwalla, M.D., an interventional cardiologist at the Heart Institute, explained to Candy that the procedure, known as transcatheter mitral valve repair, wouldn’t require stopping the heart or using a heart-lung bypass machine. It would be less risky than open surgery.

“The procedure causes much less trauma than going through the chest wall,” Dr. Chhatriwalla notes.

During the procedure, he inserted a catheter into a vein in Candy’s groin to guide the MitraClip device to the mitral valve. An echocardiogram done during the procedure allowed Dr. Chhatriwalla to see when he had the clip in the right place. Then he opened the arms of the device to grasp the mitral flaps and clip them together.

The metal clip operates like a miniature clothespin. Clipping together a portion of the flaps reduces the backflow of blood and allows the heart to pump blood more efficiently. Candy received three clips in total during the procedure to reduce the degree of mitral regurgitation from severe to mild.

Recovery was quicker as well, just as Dr. Chhatriwalla had promised. Candy was discharged home just one day after the procedure was performed.

Dr. Chhatriwalla notes that researchers at Saint Luke’s have seen anecdotal benefits to patients who have undergone the procedure. They are awaiting final results to understand whether the degree of benefit is enough to warrant this treatment for all patients with heart failure and functional mitral regurgitation.

It certainly is working for Candy.

It took Candy only a week to start feeling better. The procedure reduced blood pooling by 75 percent. That figure translated into a remarkable expansion of what Candy can now enjoy in life.

He’s become a regular at Margaret’s Place, a community center where he uses the exercise bike, plays Spades, and goes on outings around town. He can practice his guitar for two hours now, up from 30 minutes.

Although he’s not quite up to performing as a musician again, he reads from the books he’s written on miracles, including the ones in his own life.

“God has put together the best team at Saint Luke’s, bringing doctors from around the world to work on my case,” Candy said. “Thanks to them, I’m back to being Candy Hunter. I don’t feel like I want to die anymore.”

Instead of working on his last words, he’s writing marriage vows for his upcoming wedding—because now he has the strength to walk down the aisle without a stop. 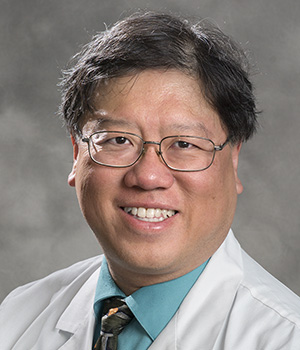