When Gina Cusimano, 19, was moving into her dorm at the University of Central Missouri for her sophomore year of college, she started having chest pain that she had never felt before.

"When I picked up some of my items, I had this sharp pain in my chest, so I was thinking it was just my asthma," Gina said.

But the pain didn't go away. Gina eventually went to the emergency department at Saint Luke's East Hospital, where doctors found a large blood clot in her lung, called a pulmonary embolism.

"Pulmonary embolism is the third-leading cause of cardiovascular death in America, and far too often, ignored and under-treated," said Dr. Kenneth Cho, an interventional radiologist at Saint Luke's.

After learning about the various treatment options and their risks, Gina and her parents decided to have Dr. Cho remove the blood clot with the cutting-edge FlowTriever device. Saint Luke's was the first in the region to perform this advanced procedure in March 2018.

Watch the KMBC's full story below. 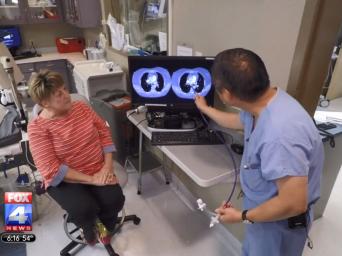