A local mom is warning others about the dangers of vaping after she says her son almost lost his life because of his vaping device.

Loren Hayes told FOX4 her 19-year-old son, Mitchell, started vaping when he was 16. Recently, he had body aches, a fever, and he couldn't stop vomiting.

Hayes told FOX4 her son spent three days in the ICU at Saint Luke's Hospital of Kansas City where doctors said he had bilateral pneumonia and critically low oxygen levels. She said doctors also found shards of glass in an X-ray of his lungs.

Hayes is now raising money for Teens Against Vaping to try to prevent others from having the same fate.

"I just don’t want any other child to go through what Mitchell and his family are going through," Hayes said. "It’s been hard and stressful and we’ve all missed work. I want people to know, you can be very sick, and while Mitchell might be out of the woods, one of his friends or classmates might not be so lucky." 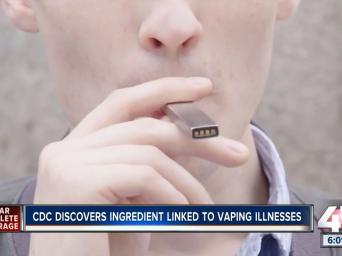