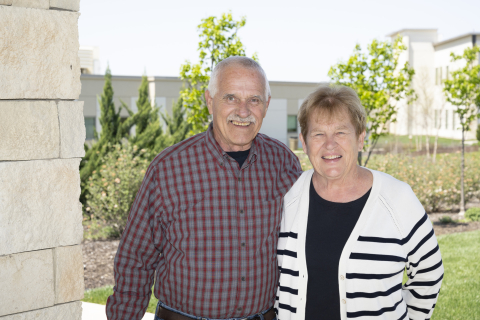 “There are no words to describe the care that Chuck received from Hedrick Medical Center.”

Chuck Greever, a Pastor from Chillicothe, Missouri, met friends for lunch one November afternoon. He was having trouble swallowing, then his speech became slurred, and his mouth started drooping. One of his friends, who happens to be a nurse practitioner, recognized the signs of a stroke.

Understanding the sense of urgency, Chuck’s wife, Connie, drove him to the Hedrick Medical Center emergency department. Doctors confirmed Chuck was having a stroke and immediately administered clot-busting medication.

“All the nurses along with the doctor in the ER were very caring and treated Chuck as though he were a family member of their own,” Connie said. “There were hugs, tears, and encouragement by every staff member caring for him.”

Chuck's care team continued to perform assessments, making sure there were no further complications. An air ambulance transferred Chuck to Saint Luke’s Marion Bloch Neuroscience Institute at Saint Luke’s Hospital in Kansas City, Missouri, where he received more specialized treatment. The prompt response and diligent attention to Chuck’s situation saved his life and helped his recovery.

After the blood clot was resolved, Chuck transferred to Saint Luke’s Rehabilitation Institute in Overland Park, Kansas, where he spent three weeks in physical and occupational therapy. When he returned to Hedrick for rehabilitation, he was able to walk with a walker. Within a week, Chuck was walking with a cane and the movement on his right side improved significantly.

“Each session Chuck would go to therapy feeling a little pessimistic thinking that he hadn’t made much progress,” Connie said. “The therapists pushed him to his potential and never allowed discouragement—they gave him a feeling of hope that he would be as close to normal as possible.”

To spot a stroke, BE FAST:

B – Balance, sudden loss of coordination

F – Face, look for the droop on one side.

A – Arms, hold out—does one drift down?