Melody Faith Unger weighed only 13 ounces when she was born almost four months early. Her skin was so transparent her organs were visible and her hearing had yet to develop. The doctors said she wouldn’t survive.

Her mom, Lois Unger, already had lost one baby to a placental abruption—when the placenta tears away from the uterus. So, when Lois felt a similar pain about five months into pregnancy, she rushed to a nearby hospital, calling her husband, Kaleb, on the way.

After a few tense seconds of silence, the emergency doctor detected the baby’s heartbeat. “That’s the sweetest melody,” Lois said.

But confirming the abruption, the doctor said he couldn’t save the baby. The Ungers refused to accept this.

So an ambulance rushed Lois to another hospital, where doctors performed an emergency cesarean delivery on May 21, 2011.

The baby survived the first 24 hours, then 48, then a week. “Making it through this is going to take a lot of faith,” Lois said. The Ungers decided to name their daughter Melody Faith.

“Mighty Melody,” as her father began calling her, had a will that confounded her doctors. She started to gain weight and develop. Kaleb watched her first eyelash grow.

The baby spent 136 days in the NICU. The doctors had to install a shunt to drain fluid from her brain. Sadly, five months after Melody’s birth, Lois died from heart problems made worse by the pregnancy.

As he grieved his wife’s death, Kaleb—who had never cared for a baby—took Melody home, determined to be both father and mother to her.

Music to her ears

Babies normally respond to sound, but Melody didn’t react at all. A hearing test at 6 months confirmed Melody was deaf. Her doctor mentioned cochlear implants, devices that would bypass the damaged parts of Melody’s ears and stimulate the auditory nerves directly.

Time was of the essence. “Speech and language development start in utero, so deafness can delay development and hinder a child’s ability to learn,” said Saint Luke’s pediatric audiologist Jamie Governal, Au.D., who works with Melody.

Fluid in her ears and the small size of her ear canals delayed the surgery. When she was 19 months old, Dr. Thedinger performed the procedure on one ear. Two months later, he did the other. After two weeks of healing, an audiologist turned on her implants. Melody turned her head toward a squeaky toy.

“Their ears are born the day you turn on the implant,” Governal explained. Now Melody had to play catch up.

Within two months, Melody responded to her name. She giggled at the nicknames her dad invented for her: “Sugar Pants,” “Turkey Bird,” and “Stinker Sue.”

Kaleb is a drummer with a Christian rock band. Melody began dancing to his music and playing his drums. She’ll play any instrument he puts in her hands: a guitar, horn, or recorder.

Now a spirited 4-year-old with luminous pigtails and matching orange glasses she chose herself, Melody has gone through physical, occupational, and speech therapy at Saint Luke’s.

Once a week, she also gets auditory verbal therapy, which focuses on learning to listen and talk. “We have to learn to listen before we learn to talk,” Governal said.

Melody has amazed her therapists and teachers. She progressed the equivalent of 17 months of development only seven months after receiving her implants.

Best of all, her hearing now tests at 95 percent of normal, although her father reports she doesn’t hear “no.”

This applies to the small stuff—like “No, you cannot climb the ladder” or “No, you cannot operate a belt sander”—as well as to her very existence. When her doctors told her, “No, you will not survive,” Mighty Melody refused to listen. 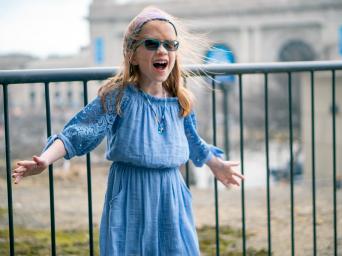 Overcoming Hearing Loss, Mighty Melody Continues Writing her Own Song
Melody Unger loves to fill the world with sound. If the spirited 8-year-old isn’t singing, she’s humming, playing the drums, asking questions, or playing make-believe. But for the first two years of her life, Melody lived in silence.