Nestled in a plush recliner, in front of a 58-inch TV, with her husband of 57 years close at hand in their Grain Valley living room, 88-year-old Delores Saunders proclaimed: “Well, this is my hospital.”

Instead of doctors being paged over a squawking intercom, a golden clock above the fireplace played music at the top of the hour by the 1970s soft rock band Bread.

To her left, tissues, a TV remote, a pack of gum and grocery store coupons cluttered a table that her husband, Lee, jokingly called the “pile.” There was also an iPad on a stand.

Tapping a button on the screen, Saunders, or her husband, could connect in seconds, 24/7, to a nurse in a medical command center at Saint Luke’s East Hospital, 13 miles away.

In September, when she couldn’t stop coughing, her family rushed her to the hospital, where she was diagnosed with pneumonia. But instead of putting her in a hospital bed for several days, Saint Luke’s asked if she’d rather recuperate at home.

Saunders, who had sextuple coronary bypass surgery in 2004, couldn’t pass up the chance to sleep in her own bed.

She is one of the early patients in Hospital in Your Home, a new hybrid program of virtual and daily in-person care offered by the Saint Luke’s Health System — and hospital-at-home movement growing nationally.

It’s available to certain patients, ones who are clinically stable, who would otherwise need to be hospitalized for serious illnesses and problems related to chronic diseases such as congestive heart failure and chronic obstructive pulmonary disease. They receive the same level of care at home they would get in the hospital, hospital officials say.

The Kansas City Star talked to Dr. Michael Nassif, medical director of Saint Luke's Hospital In Your Home program, about the first program of its kind in the Kansas City area.

Read the rest of the Kansas City Star article: In Your Own Bed: Kansas City Hospital Launches a New Way to Avoid Hospital Stays 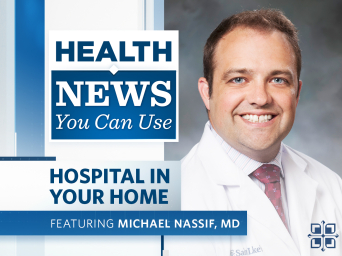 Health News You Can Use: Hospital in Your Home
With Saint Luke’s new care model offering state-of-the-art virtual technology and in-person, hands-on care in the home, that is now a real possibility for some patients here in the Kansas City area. 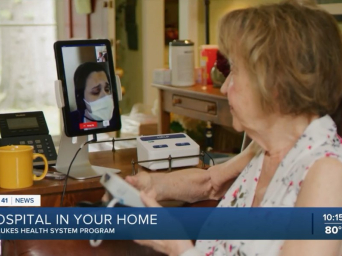 KSHB: Saint Luke's Launches Hospital In Your Home Program
KSHB talked to Dr. Michael Nassif about how Saint Luke's is the first in the region to adopt the innovative model of care.