David Hartzler was the epitome of health.

A former collegiate swimmer, he had continued the sport into adulthood. Three times a week, the Lawrence, Kan., resident swam 3,000 meters with the Lawrence Masters Swim Club.

His wife, Lorinda, owns Body Boutique fitness center, so exercise and healthy eating were a mainstay for the active couple and their children.

But in fall 2009, the then 44-year-old noticed that he fatigued easily. Often during practice, Hartzler had to lean against the pool’s side to catch his breath. He frequently felt exhausted at work and fell asleep watching television in the evenings.

“I didn’t think it was anything serious,” he recalled. “I just thought I was getting older and slowing down. And we’d just had a baby, so sleeping a full night was rare.”

But then Lorinda noticed and said, “Maybe you should see your doctor.”

“I was just so shocked because I’ve always taken such good care of myself,” said Hartzler. “It was like being hit upside the head, realizing ‘No, you’re not healthy.’”

The doctor referred Hartzler to a Lawrence cardiologist for an electrical cardioversion. That’s a procedure that shocks the heart back into rhythm.

The results, however, vary for patients. Some maintain regular heartbeats for months, even years. Others have a shorter timeframe before their A-fib returns.

“I was frustrated. I didn’t want to be on medications, and I’m the kind of person who wants a permanent solution instead of a quick fix,” said Hartzler. “My doctor said, ‘I’m going to send you to the best guy I know: Alan Wimmer at Saint Luke’s Mid America Heart Institute.

A board-certified electrophysiologist, Alan Wimmer, M.D., is a cardiologist who specializes in treating disorders of the heart’s electrical system. He discovered Hartzler had persistent A-fib—when the erratic heartbeat lasts more than seven days.

“It was like the perfect electrical storm for my heart,” said Hartzler. “I thought, ‘Good grief—no wonder I’m so tired!’”

Dr. Wimmer walked him through the various treatment options, and they chose catheter ablation.

During this nonsurgical procedure, Dr. Wimmer would snake a catheter from a vein in Hartzler’s groin up to his heart. There, he’d make an electrical “road map” showing which atria veins were sending erratic signals. He could then burn away the tissue surrounding the vein using radiofrequency energy and correct Hartzler’s heartbeat.

“It’s a straightforward procedure that typically lasts three hours, and the patient can go home the next day,” said Dr. Wimmer. “But David’s case turned out to be one of the most challenging I’ve had.”

On Dec. 2, 2009, Hartzler underwent the ablation procedure. But once Dr. Wimmer had ablated the problem tissue, another arrhythmia cropped up elsewhere in the atria. This happened twice, turning the procedure into a six-plus-hour event.

“Experiencing separate arrhythmias is not that uncommon because the heart’s upper chamber is complex,” said Dr. Wimmer. “This was the first time I’ve mapped three arrhythmia’s during a single procedure.”

Hartzler was swimming within a few weeks.

Since the ablation, Hartzler hasn’t experienced A-fib. He’s amazed at his stamina.

“It’s difficult to put into words how much better I feel,” he said. “I was swimming at 65 percent, and now I’m in the fast lane. It’s like I’m 20 years younger.”

And he’s thankful for Dr. Wimmer’s stamina in going the extra mile to correct his irregular heartbeats.

“I’m so impressed with Dr. Wimmer,” said Hartzler. “He knew I had tried to take care of myself, and he went above and beyond to make me healthy again. I just feel amazing.” 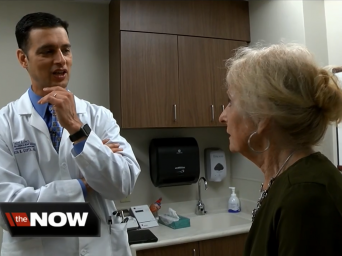