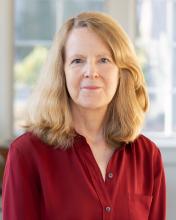 Dorothy Wickenden is the author of Nothing Daunted and The Agitators and has been the executive editor of The New Yorker since January 1996. She also writes for the magazine and is the moderator of its weekly podcast The Political Scene. A former Nieman Fellow at Harvard University, Wickenden was national affairs editor at Newsweek from 1993 to 1995, and before that was the longtime executive editor at The New Republic. She lives with her husband in Westchester, New York.

From the intimate perspective of three friends and neighbors in mid-nineteenth century Auburn, New York, The Agitators tells the fascinating and crucially American stories of abolition, the Underground Railroad, the early women’s rights movement, and the Civil War.

Dorothy Wickenden traces the history of women's progressive politics in the U.S. through the lives of Harriet Tubman, Martha Wright, and Frances Seward using letters the women wrote to each other. Before women could be elected and participate in Congress, they made their impact behind closed doors. The book extends over 40 years—from the time when Tubman was still enslaved to two decades after the Civil War.

Additional event details, participating boutiques, and sponsorship information will be shared in the months leading to the event. We look forward to connecting with you later this year.

Register as a sponsor