A hemorrhagic stroke happens when a blood vessel in the brain ruptures or leaks. A blood vessel on the surface of the brain bursts and bleeds (hemorrhages). This spills blood into the surrounding tissue.The arachnoid is one of the 3 membranes that surround the brain. In a subarachnoid hemorrhage, the blood leaks under this membrane.

This type of stroke often happens suddenly, with little warning. It is the most serious of all types of strokes. 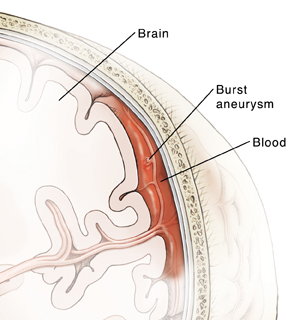 What happens during a subarachnoid hemorrhage?

What are the symptoms of a subarachnoid hemorrhage?

Any stroke is a medical emergency. If you have any of these symptoms, even if they seem to get better, call 911 right away:

How is a hemorrhagic stroke treated?

The acute phase lasts from the first minutes to hours after symptoms start. During this phase, treatment focuses on relieving pressure on the brain and preventing further damage. A procedure or surgery may be done to repair the ruptured (burst) aneurysm. A drain may be placed into the brain to relieve pressure. Medicines to control blood pressure may be given through an IV line. Seizure medicine is often given. Tests will likely be done to check for other aneurysms in the brain. If they are found, surgery may be done to reduce the risk that they will burst and bleed.

After the acute phase, treatment focuses on recovery. Long-term damage from a stroke can include paralysis, trouble speaking or understanding, and trouble thinking clearly. Rehabilitation (rehab) can help reduce these effects and regain skills. Rehab starts in the hospital and generally continues in an inpatient or outpatient facility, and eventually at home. It will focus on regaining lost skills. It may include:

In addition, medicines that help prevent another stroke may be given. These include medicines to control blood pressure and prevent bleeding.