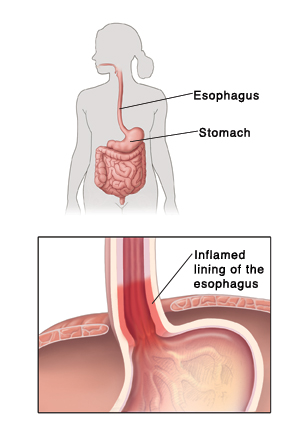 Do you often have burning pain in your chest? You may have esophagitis. This is when the lining of the esophagus becomes red and swollen (inflamed). The esophagus is the tube that connects your throat to your stomach. This sheet tells you more about esophagitis. It also explains your treatment options.

Reflux esophagitis. This is the more common type. It is caused by GERD (gastroesophageal reflux disease). Stomach contents with stomach acid flow back up into the esophagus. This happens over and over. It leads to inflammation. Risk factors can include:

Infectious esophagitis. This is caused by an infection. You are more at risk for this if you have a weakened immune system and poor nutrition. Antibiotic use can also be a factor. The infection is often due to the following:

Eosinophilic esophagitis. Foods or other things around you can give you an allergic reaction. This triggers an immune response and leads to esophagitis.

Pill-induced esophagitis. Certain types of medicines can cause inflammation and ulcers in the esophagus. These include doxycycline, aspirin, NSAIDs, alendronate, potassium, quinidine, iron.

The following symptoms can occur with esophagitis:

Your healthcare provider will ask about your health history and symptoms. You’ll also be examined. Sometimes certain tests are needed. These may include:

Medicines. Different medicines can help treat esophagitis. The medicine used will depend on the type of esophagitis you have. Talk with your healthcare provider.

Surgery. This may be needed for severe reflux esophagitis. Other noninvasive procedures to treat GERD and esophagitis are being studied. Your provider can tell you more.

Why treatment Is important