KMBC: Anonymous kidney donor turns out to be surprise of a lifetime

Two Kansas City-area sorority sisters now share a bond they never expected. And it all started with a secret. One of them was holding on to news that would change both of their lives.

Doncella Liggins has kidney disease. She was on a transplant waiting list when she got the news of a match - an anonymous donor.

Doncella and Beverly Burch have been friends and sorority sisters for decades - living in the small town of Butler, Missouri.

Both were thrilled when doctors at Saint Luke's told Doncella they'd found a donor kidney.

For the next six months, Beverly was hiding a secret. She was that anonymous donor.

"This is not just a story of friendship and love, but of heroism. And to step forward and donate part of oneself to save the life of another," said Dr. Eddie Island, transplant surgeon with Saint Luke's Transplant Program.

Watch KMBC's sorty below to find out how Doncella found out Beverly was her anonymous donor. 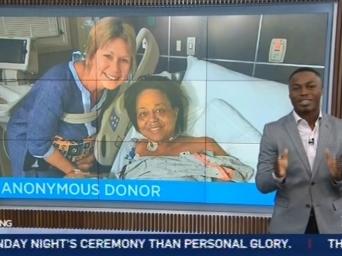 CACTVNC: Anonymous kidney donor turns out to be surprise of a lifetime