Now the hospital has expanded its service by establishing space for a milk bank where donations are not only collected, but also screened, processed, pasteurized, and dispensed to babies in the region whose mothers are unable to supply the milk to meet their babies’ needs. The center expects to begin pasteurizing and dispensing milk in May.

Previously, donations collected at Saint Luke’s depot were shipped on dry ice to the Mothers’ Milk Bank in Denver for pasteurization and distribution to infants in need across the country. Now donations will stay in the area to benefit high-risk and premature infants who are hospitalized in one of the many existing Neonatal Intensive Care Units (NICU) in the Kansas City area.

“Response from the community since we opened our depot almost two years ago has been overwhelming,” said neonatologist Barbara Carr, M.D., medical director of the Saint Luke’s Heart of America Mothers’ Milk Bank and physician with the Pediatrix Medical Group, Saint Luke’s provider partner for specialty care in the NICU. The depot has collected more than 5,000 gallons (or 80,000 ounces) of donated milk for shipment to the Denver bank. “Now that we’ve transitioned from a collection depot to a fully functional milk bank here in Kansas City, those local donations will be able to nourish babies here in our community.”

After donors are medically screened, their donated milk is pasteurized, analyzed for nutrient content, and distributed to hospitals in the area that choose to use donor human milk. For infants in the home setting, a physician prescription is necessary.

The value of human milk to nourish and protect an infant has been well documented in medical literature for many years. Human milk contains important antibodies that protect infants from infections, particularly important for pre-term infants. It is the best nutrition for all babies and is more easily digested by the pre-term baby than formula.

“Mother’s own milk is always preferable,” said Dr. Carr. “When that’s not possible, pasteurized human milk is the next best choice.” Saint Luke’s Hospital has provided donor human milk to all eligible infants in its NICU since 2009. Other local hospitals have followed suit as they have become more aware of the benefits to fragile infants, Dr. Carr said.

As a non-profit entity, Saint Luke’s Heart of America Mothers’ Milk Bank relies on the generosity of lactating mothers across the Midwest region to donate their excess milk. The milk bank assesses a fee from requesting facilities far below the actual cost incurred to collect, process, and dispense the milk. To provide this valued service, the milk bank relies on financial contributions from the community. A $50,000 gift from the Saint Luke’s Hospital Auxiliary, plus support from private individuals, provided the much-needed startup funding for education and equipment at the milk bank.

In 2011, the HMBANA network distributed nearly 2 million ounces of donor milk to high-risk infants across the U.S. and Canada. A scarce resource, donated mothers’ milk is prioritized to the sickest, most fragile infants, such as those born prematurely, with immune deficiency disorders, and congenital defects affecting the gastrointestinal tract. Term and healthy infants whose mothers are unable to provide milk due to maternal illness or specific medication use may also receive donor milk when the donor milk supply allows.

To become donors, mothers are required to be medically screened in advance. Milk donations are accepted at Saint Luke’s Women’s Center at the corner of 43rd Street and Wornall Road in Kansas City, Mo., where valet parking makes it easy for busy women to complete the health screening process and drop off milk donations.

To become a milk donor or to learn more about Saint Luke’s Heart of America Mothers' Milk Bank, call 816-932-4888, or e-mail kcmilkbank@saint-lukes.org. 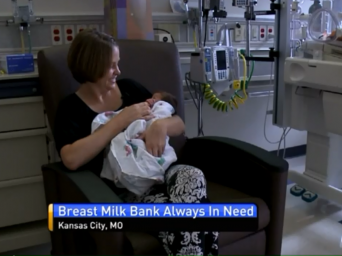 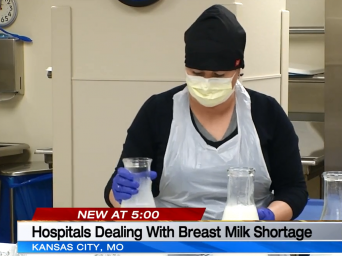